My oh my. Wasn't that one of the craziest weeks ever for the markets?

Thursday announcement from SNB about removing their floor for EURCHF at 1.20 brought the house down, literally - Alpari went bust, FXCM had to be bailed by Leukadia tsk tsk tsk.

Many times I was asked why I don't trade the swissy - after all it's a currency of one of the strongest countries in Europe. The reason why I stay away from swissy is because a) its a smaller currency and b) I really don't like it when I hear stuff like: "we're setting the currency floor at X price" - purely because that immediately means that the currency is widely rigged by the country's central bank. Anything that's being kept afloat by such practices like "defend 1.20 at all cost" is likely to bring a massive amount of volatility once that floor gets removed. Especially in a less liquid smaller currency. It implies that the price we are seeing reflected in the markets isn't a fair value as perceived by market participants, but merely a price that the central bank would like to keep for their own agenda. 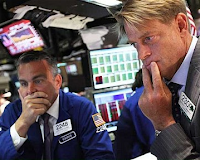 Hence, 2 years ago when I noticed a massive blip upwards spanning around 2000 ticks, looking like a stop-hunt but in reality just a low liquidity volatility moment, I removed all swissy related pairs from my trading portfolio. Last week, my decision to do so was fully vindicated.

But enough of the carnage and aftermath of brokers going bust and retail traders losing their shirts. Surely, there are now some new millionaires as a result of the SNB floor removal.

Onwards to the topic of EU QE.

Draghi obtained support from EU justice court to go through with the new bond purchasing program. I've seen a few people around asking "Why did the DAX jump so much? Does anyone know the reason?!"

So let me help those people put 2 & 2 together and lets review what modern practices of QE have shown us. Using the most recent example of US QE - a ridiculously aggressive policy from the FED has seen their equity markets go on a 5-year rally and generally in hindsight it was an exceptional move from the FED that saved US economy.
Fed chairman Bernanke began the US QE program and caused a huge long-term rally in equity markets.
Draghi got the green light for QE, German DAX immediately rallied 2%.

Will history repeat itself? I say, most likely. I expect to see EU equity markets rallying for the duration of QE, because of the influx of all that new cash into companies. None of that money will reach the regular consumer, just like it didn't reach your average Joe in America. This money is aimed towards business to create jobs and to help propel the economy, not to repay debts - this will come later, once the economy is strong once again. I doubt it will cause hyperinflation, in fact US inflation stayed at historically record lows throughout QE. So in conclusion, I genuinely think that this is another great move from Super Mario and I am looking forward to the next couple of years. We live in turbulent, but interesting times and I'm happy to be a part of the action as a trader.